"Take all the money from my wallet but tell this story to my children.  They only know pieces of it. It's time for them to know all of it. Tell them I loved them very much, that they were worth the years I spent without seeing my brother. Tell them to walk in the shade. To listen with their eyes, to see with their skin, and to feel with their ears, because life speaks to us all and we just need to know and wait to listen to it, see it, feel it." 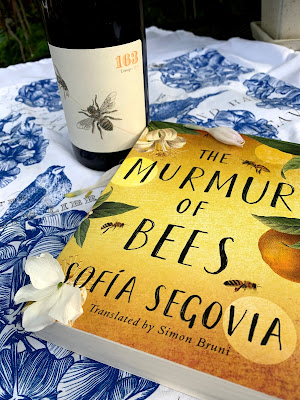 I am always on the lookout for a story so beautifully told it takes my breath away. This is how I felt about "The Murmur of Bees", by Sofia Segovia and translated by Simon Bruni. These are the books I find the most difficult to write about.
Set in an area of northern Mexico, with ground fertile not only for growing sugar cane and maize, but for superstitious tales and rumors of witches roaming in the night. One morning when a beloved elderly Nana is discovered missing, a search party is sent to find her. Nana Reja is found under a bridge holding a mysterious bundle; a second bundle beside her.  When the swaddling is removed, a baby is discovered wrapped in a blanket of bees. In the second bundle a hive is found. Nana Reja is insistent both the baby and the hive be taken back to the hacienda. Some who viewed the strange child with the facial deformity, thought him to be evil. Word spread he had been "kissed by the devil." The old nana believed differently. The wealthy landowners Beatrix and Francisco Morales became his Godparents, named him Simonopio and cared for him as their own son.
With his bees always with him, leading and teaching, Simonopio discovers he can see, hear and feel the future. His extraordinary gifts prove to be beneficial in sensing danger and protecting the Morales family during a time the world is being ravaged by the Spanish flu pandemic and with a revolution brewing. Ultimately he will need to use his gifts to protect himself from the one who he knows as "the coyote."
"The Murmur of Bees",  Sofia Segovia's first novel to be translated to English, has all the characteristics of a page turner: mystery, tragedy, magical realism and family drama, and yet, it is not a quick read. At almost five hundred pages, this is a book deserving of attention and patience. Like so many of my favorite books, my heart ached when I turned the last page. It was not the ending I had hoped for, yet it was the perfect ending. The last one hundred pages are beautiful; I immediately reread those last chapters just to more fully absorb, appreciate and ponder the beauty of it's conclusion.
Enjoy
and
Happy Reading!
Posted by Bonnie at 9:47 PM 5 comments:

I'll Cheer You to the End 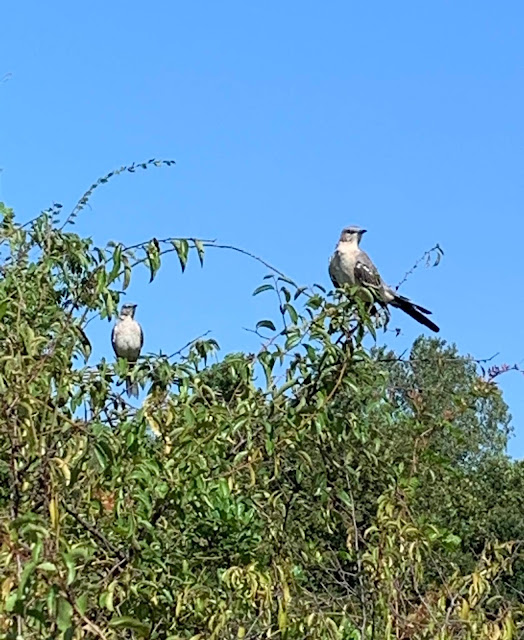 How are you doing friends?
Here we are just beginning to wade into Autumn; I couldn't be happier. I love everything about this time of year. It makes my heart happy and feels me with so much hope. The crisp morning air is perfect for walks when time allows. It was such a morning when I caught my social distancing friends chattering away one cool sunny morning.
Are you still hanging in there?
Do you feel like things are beginning to feel somewhat normal?
I don't either. I've been in school three weeks, it has helped even though it has kicked my backside. Some days have been easier than others; and, it sure helps when younger teachers are saying they are whipped at the end of the day as well.
I know we will come to the end. Perhaps the end will not look quite like where we were before, but we will turn the corner when the time is right. I know, we are ready now, aren't we? It's hard, but let's hang in there. Let's give grace to not only our friends and family, but those we might not like so much. Be gentle with yourself. No one is breezing through this.
I am rooting for you,
for me,
for our country
and the world.
We can do this... I promise!
Have the very best week ever!
Hugs!
(shhh.... I'll be back with some book talk.)
Posted by Bonnie at 6:10 PM 5 comments:

Reading During a Pandemic

"Many people, myself among them, feel better at the mere sight of a book." 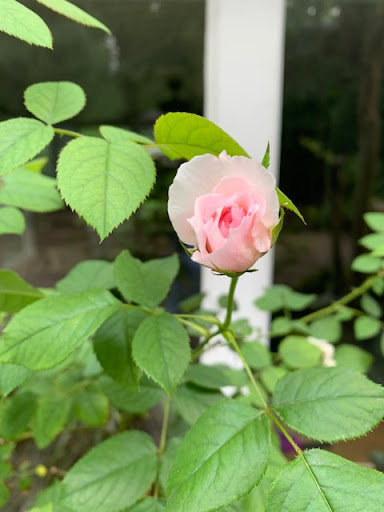 Happy Friday friends!
Is today a good day to talk about books?
It has been awhile hasn't it?
When the schools closed in mid-March due to the pandemic spreading through our state, I quickly began dreaming of the books I would have the time to read.  I picked up book after book, finding nothing held my attention. These were books I would normally devour. I soon realized my reading was broken. You know reading is my passion; not finding a book to dig into was extremely distressing. I could only clean my house so often, and after bingeing on a few Netflix's series, I longed to escape into a good read. With the bookstore and the library closed I began downloading. Friends my reading was all over the place.
Let's begin with two books totally out of my wheelhouse, but helped pull me
through my reading drought. 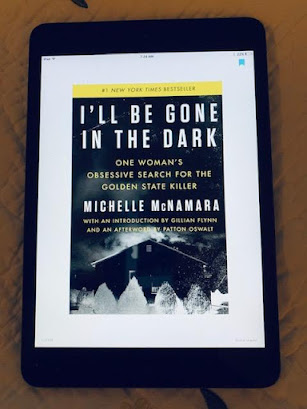 I'll Be Gone in the Dark
Michelle McNamara
"I'll Be Gone in the Dark: One Woman's Obsessive Search for the Golden State Killer is a true crime book by Michelle McNamara about the Golden State Killer. The book was released posthumously on February 27, 2018, nearly two years after McNamara's death and two months before an arrest would be made in the case"
True crime is not the genre I normally pick to read. This one, fellow readers, is creepy; I frequently double checked my doors while reading. Not being easily frightened, I believe what really bothered me was I lived, though several years after he became inactive,  in the area in northern California where he frequently selected his victim. I frequently walked the trail he used to stalk and move between homes in the area. I suppose I just knew too much about the area, and I realized no matter the precautions taken, we are still vulnerable.
Sadly, Ms. McNamara died from a drug over-dose before finishing her book, and before the Golden State Killer's identity was discovered. She writes she was becoming so obsessed with this case she lost all interest in other areas of her life. Though this killer had retired,  I cannot help but believe Michelle was his last victim.
Creepy and impossible to put down.
***
Okay, I'm going to continue with the fright fest. 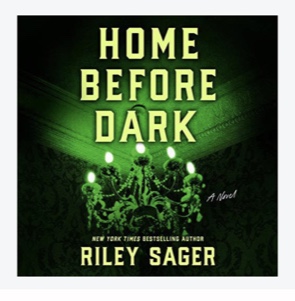 "In the latest thriller from New York bestseller Riley Sager, a woman returns to the house made famous by her father's bestselling horror memoir. Is the place really haunted by evil forces as her father claimed? Or are there more earthbound -- and dangerous-- secrets hidden within its walls?
I actually listened to this one on audible. I found myself pulling a few more weeds in the garden, and taking a little bit longer to vacuum around the house just to find out what was going to happen next. Though Home Before Dark didn't keep me up at night, it did keep me listening and guessing how it would end. This would be an excellent selection for you Halloween reading.
You know I love pairing books and food; sometimes all you need is a big bowl of popcorn. Toss in a handful of candy corn. Grab a favorite snack and settle in with one of these nail biting novels. Don't  forget to check your windows and doors.
Who knew I could be pulled to the dark side.
Has your reading changed during quarantine?
I would love to hear about it.
***
Here's what I am digging into this weekend.
And friends, it is a real book that I can hold in my hands. 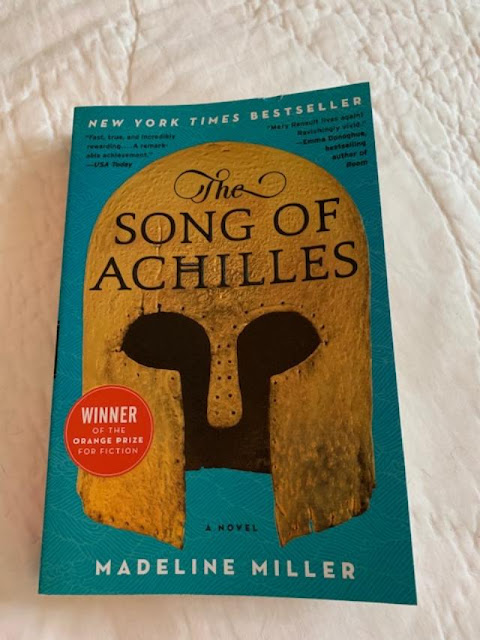 What fun things are you doing this weekend?
Happy reading friends!
Posted by Bonnie at 9:09 PM 7 comments:

"If you feel that you are not strong enough to let your creative voice become heard, start with a whisper Your voice will come." unknown 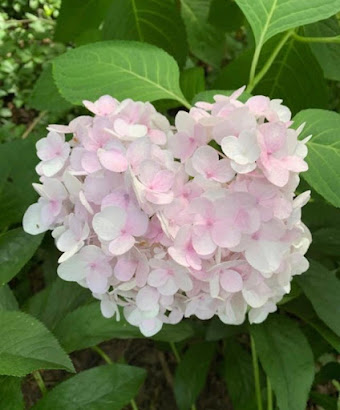 I know I posted of my return and then went quiet... again. It was only for a few days this time. I am still figuring out where to take Living Life from here. What do I want to do in this space.  Shortly after writing about taking a break from Facebook, I sat and read back through ten years of my own writings. Reading through the years, I discovered the post when I found my voice... when I became a little more confident with MY words instead of trying to imitate or impress others. While reading your comments (some made me teary... such kind words)  I remembered how much I truly enjoyed writing and connecting here.

So... let's see what happens!  I will continue with my disclaimers, and I'm almost always unedited, there will be mistakes... no judging. I hope you will stop by and leave a comment. (One day I may figure out how to reply individually.) Please let me know your thoughts.

Hello... are you still there?

I'll be back soon to share some of my favorite books from the past several months. Oh my, what Covid has done to my reading life!

Find something that makes your heart smile!

"I do not understand the mystery of grace _ _ only that it meets us where we are and does not leave us where it found us." ..Anne Lamott 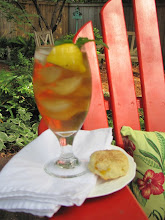